Home >> Book Paragliding in Himachal Pradesh, Contact us for Paragaiding in Shimla

Spend a holiday in the stunning Himalayas valley! Get amazing offers on Himachal Pradesh Tour Package at Thamsar La Tours and Travels. Checkout our price list and Book Himachal Tour Travel Package now to grab it at the best price. If your Requirements are unique, Our experts would love to create a package just for you.

Paragliding is the most popular activity in Bir Billing Himachal Pradesh. Every thrill seeker enjoys paragliding as an adrenaline rush activity. Bir has become a famous paragliding destination not just in India, but also across the world, following the 2015 Paragliding World Cup. The Dhauladhar mountains, which lead to Palampur (30 KM) and Dharamshala, are the most common mountain ranges seen from the Bir Valley (60 KM). The Dalai Lama, Tibet's spiritual leader and Guru, lives in Dharamshala. The distance to Mandi from the east is around 65 kilometres. Manali (110 KM) awaits you if you continue north through desolate valleys.

Soaring over the beautiful skies of Bir Billing, regarded as India's paragliding capital, feel the thrill of the wind. Camping and Paragliding in Bir Billing draws explorers of all ages and cultures because it allows them to glide over the Dhauladhar mountains, lush green meadows, lovely water streams, and the wealth of nature. While Paragliding at Bir Billing, take in the grandeur of the Dhauladhar mountains from an altitude of about 8200 feet. View rugged hilltops while safe and secure in the harness hovering in the azure sky. For this adventure activity, the take-off site is Billing, a popular hotspot around 8200 feet above sea level, with a landing at Bir, which is 4300 feet below sea level. You and your instructor are ready to take off after a crucial briefing session with our hand-picked pros. Because wind plays such an important role in paragliding, you'll need extremely calm conditions for landing. Furthermore, the landing place must be smooth to reduce the risk of an accident during the touchdown. Bir is the landing place, and because to its smooth ground and low wind intensity, it qualifies as a safe landing spot for Paragliding in Himachal. Passing through the Bara Bangel Village Trek and enjoying paragliding at Bir Billing. It’s solely accessible from June to November Trek starts from Bir village through the forests. Night camp in Hanumangarh. 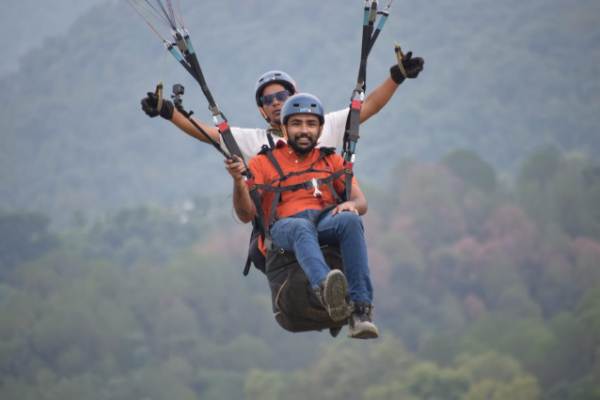 Discuss your Dream Vacation with us

If you have any query or you want to check our wide range of packages. let's contact us right now